Oryzanol is a class of nonsaponifiable lipids of rice bran oil (RBO). More specifically, oryzanol is a group of ferulic acid esters of triterpene alcohol and plant sterols. In experiment 1, the mechanisms of the cholesterol-lowering action of oryzanol were investigated in 32 hamsters made hypercholesterolemic by feeding chow based diets containing 5% coconut oil and 0.1% cholesterol with or without 1% oryzanol for 7 wk. Relative to the control animals, oryzanol treatment resulted in a significant reduction in plasma total cholesterol (TC) (28%, P < 0.01) and the sum of IDL-C, LDL-C, and VLDL-C (NON-HDL-C) (34%, P < 0.01). In addition, the oryzanol-treated animals also exhibited a 25% reduction in percent cholesterol absorption vs. control animals. Endogenous cholesterol synthesis, as measured by the liver and intestinal HMG-CoA reductase activities, showed no difference between the two groups.


Abstract: gamma-Oryzanol, a mixture of ferulic acid esters of sterol and triterpene alcohols, it occurs in rice bran oil at a level of to 2%,where it serves as natural antioxidant. Recent research has shown that gamma-Oryzanol can lower the cholesterol levels in the blood, lowering the risk of coronary heart disease, besides that also has been used in Japan like natural antioxidant in foods, beverages and cosmetics. This review refers to aspects about gamma-Oryzanol, like its physiochemical properties, its presence in the rice bran oil, its antioxidant and hypocholesterolemic activity, as well as, identification, quantitation and extraction methods.


Abstract: Oryzanol is a class of nonsaponifiable lipids of rice bran oil (RBO). More specifically, oryzanol is a group of ferulic acid esters of triterpene alcohol and plant sterols. In experiment 1, the mechanisms of the cholesterol-lowering action of oryzanol were investigated in 32 hamsters made hypercholesterolemic by feeding chow based diets containing 5% coconut oil and 0.1% cholesterol with or without 1% oryzanol for 7 wk. Relative to the control animals, oryzanol treatment resulted in a significant reduction in plasma total cholesterol (TC) (28%, P < 0.01) and the sum of IDL-C, LDL-C, and VLDL-C (NON-HDL-C) (34%, P < 0.01). In addition, the oryzanol-treated animals also exhibited a 25% reduction in percent cholesterol absorption vs. control animals. Endogenous cholesterol synthesis, as measured by the liver and intestinal HMG-CoA reductase activities, showed no difference between the two groups. To determine whether a lower dose of oryzanol was also efficacious and to measure aortic fatty streaks, 19 hamsters in experiment 2 were divided into two groups and fed for 10 wk chow-based diets containing 0.05% cholesterol and10% coconut oil (w/w) (control) and the control diet plus 0.5% oryzanol (oryzanol). Relative to the control, oryzanol-treated hamsters had reduced plasma TC (44%, P < 0.001), NON-HDL-C (57%, P < 0.01), and triglyceride (TG) (46%, P < 0.05) concentrations. Despite a 12% decrease in high density lipoprotein cholesterol (HDL-C) (P < 0.01), the oryzanol-treated animals maintained a more optimum NON-HDL-C/HDL-C profile (1.1 +/-0.4) than the control (2.5 +/- 1.4; P < 0.0075). Aortic fatty streak formation, so defined by the degree of accumulation of Oil Red O-stained macrophage-derived foam cells, was reduced 67% (P < 0.01) in the oryzanol-treated animals. From these studies, it is concluded that a constituent of the nonsaponifiable lipids of RBO, oryzanol, is at least partially responsible for the cholesterol-lowering action of RBO. In addition, the cholesterol-lowering action of oryzanol was associated with significant reductions in aortic fatty streak formation.


Abstract: A range of human and animal studies have shown that rice bran oil (RBO) is an edible oil of preference for improving serum cholesterol levels and lipoprotein profiles with similarity to the more commonly used vegetable oils such as com oil and safflower oil. Of particular interest is the observation that blending RBO with safflower oil at a definite proportion (7:3, wt/wt) magnifies the hypo-cholesterolemic efficacy, compared with the effect of each oil alone. Although the mechanism underlying this effect is not apparent at present, the blending may have a practical significance. The blending effect was reproduced in rats fed a cholesterol-enriched diet, and there was also a decrease in liver cholesterol. The occurrence of peculiar components such as gamma-oryzanol and tocotrienols could be responsible for the hypocholesterolemic effect of RBO.


Abstract: Unsaponfiable matter (U) was prepared from both raw and extrusion stabilized (130 degrees C) rice bran and tested for cholesterol-lowering activity in hamsters by addition to diets containing cellulose, raw rice bran, or stabilized rice bran at either the level found in the rice bran diet (0.4%,1X) or twice that level (2X). All diets contained 0.3% cholesterol,10% total dietary fiber,10.1% fat, and 3% N (same plant-to-animal N ratio). After 21 days, plasma cholesterol was significantly reduced by rice bran diets containing added U compared to the cellulose control diet, while the high density lipoprotein cholesterol -to-low density lipoprotein cholesterol ratio remained unchanged in all treatment groups. Liver cholesterol was significantly reduced by all rice bran-containing diets and with cellulose diets containing 2X added U when compared to the control diet. Rice bran diets plus added U resulted in cholesterol values lower than cellulose diets containing the same level of U. Stabilization of rice bran did not appear to affect the plasma and liver cholesterol responses to the unsaponifiable matter prepared from the extracted oil. There appears to be a dose response to rice bran unsaponifiable matter in plasma and liver cholesterol reductions. After 2 weeks, fecal fat and neutral sterol excretion were significantly greater with all treatment diets compared to the control diet. Fecal fat was negatively correlated with liver as well as plasma cholesterol (r = -0.97, P less than or equal to 0.0001 and -0.91, P less than or equal to 0.0006, respectively). Under the conditions of this study, cholesterol-lowering activity of rice bran is present in its unsaponifiable matter in addition to other components. Increased fecal excretion of fat and neutral sterols appears to be a possible mechanism for cholesterol-lowering by rice bran.

We recently reported the improved oxygen radical absorbance capacity (ORAC) assay using fluorescein (FL) as the fluorescent probe. The current ORAC(FL) assay is limited in hydrophilic antioxidant due to the aqueous environment of the assay. Lipophilic antioxidants mainly include the vitamin E family and carotenoids, which play a critical role in biological defense systems. In this paper, we expanded the current ORAC(FL) assay to lipophilic antioxidants. Randomly methylated beta-cyclodextrin (RMCD) was introduced as the water solubility enhancer for lipophilic antioxidants. Seven percent RMCD (w/v) in a 50% acetone-H(2)O mixture was found to sufficiently solubilize vitamin E compounds and other lipophilic phenolic antioxidants in 75 mM phosphate buffer (pH 7.4). This newly developed ORAC assay (abbbreviated ORAC(FL-LIPO)) was validated through linearity, precision, accuracy, and ruggedness. The validation results demonstrate that the ORAC(FL-LIPO) assay is reliable and robust. For the first time, by using 6-hydroxy-2,5,7,8-tetramethyl-2-carboxylic acid as a standard (1.0), the ORAC values of alpha-tocopherol, (+)-gamma-tocopherol, (+)-delta-tocopherol, alpha-tocopherol acetate, tocotrienols, 2,6-di-tert-butyl-4-methylphenol, and gamma-oryzanol were determined to be 0.5 +/- 0.02, 0.74 +/- 0.03, 1.36 +/- 0.14, 0.00, 0.91 +/- 0.04, 0.16 +/- 0.01, and 3.00 +/- 0.26, respectively. The structural information of oxidized alpha-tocopherol obtained by liquid chromatography/mass spectrometry reveals that the mechanism for the reaction between the vitamin E and the peroxyl radical follows the hydrogen atom transfer mechanism, which is in agreement with the notion that vitamin E is the chain-breaking antioxidant. 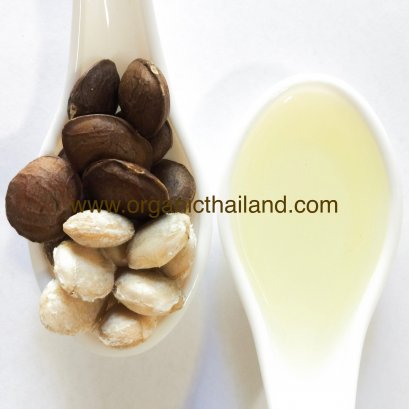 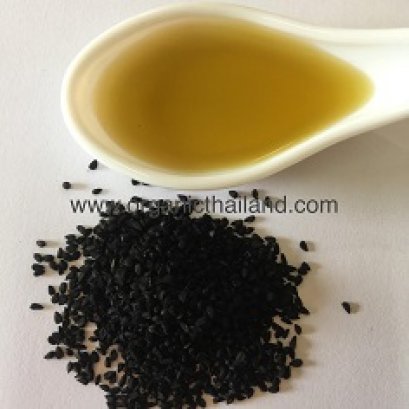 Produced from Thailand mature moringa seeds with in-house cold pressing process. Pure moringa seed oil. All natural - No additives, No preservatives. Once opened the package will expire in 1year.